Wait nearly over for homebuyers to get first look at blocks in the first Lara West housing estate to receive development approval. 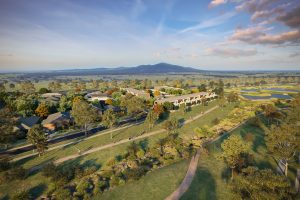 HOMEBUYERS can soon see the blocks on offer in the first Lara West housing estate to receive development approval.

Villawood Properties this week received a permit for the Coridale estate in the growth corridor west of O’Hallorans Rd.

Coridale is an 1107-lot community on an 89ha property bordered by Patullos, O’Hallorans and Windermere roads.

Villawood has partnered with landowners Bill and Beryl Wilks on the project, which is at the eastern end of the growth area.

Mr Costelloe said the development would include a neighbourhood activity centre, a kindergarten and parkland, while Club Coridale would be Villawood’s signature residents club and feature a swimming pool, a gymnasium, multi-sports courts, parents/child area, a function room and more.

“This will be our eighth club. They become a magnet for residents to make new friends. They host yoga clubs, parents groups, walking groups, tennis clubs, it’s that nucleus or the centrepoint of the community,” he said.

“I think that gives us the edge over everybody else.”

Extensive ponds and wetlands would grow from the dry creek bed through the property, which would also provide some medium density residential opportunities.

Mr Costelloe said Villawood hopes construction can get underway before the end of the year.

Construction of the first stage will begin as soon as council planners give engineering approval for the display village, where 16 builders had committed to build on 32 lots.

Villawood Properties other Geelong developments include Armstrong at Mt Duneed and Wandana.

“Armstrong has been 60 per cent Geelong buyers, 20 per cent from the Surf Coast. I think the buyer market in Lara will be quite different. For people west of Melbourne, they’ll see it as a much better option,” he said.

“Half the buyers will be from Geelong and people who are considering a better option to the west of Melbourne.”

The project will make up 20 per cent of the 6000 new homes in the Lara West corridor.